Seascape in the Connemara region

“Take the world nice and easy and the world will take you the same”. I saw this on a sign in Dublin and it has stuck with me ever since.  That’s just one of the many beauties of Ireland…. It becomes a part of you.

For as long as I can remember, I have always dreamed of going to Ireland.  I have always been captivated by the people, the lore, the music and of course… I kinda love Guinness.  So in 2011 when a friend of mine said that he always dreamed of going to Ireland since his family was originally from there, the trip was set in short order.  We arrived in Dublin in July, 2011 and immediately started a memorable adventure.

We stayed at the Brooks hotel which was a really nice hotel and perfectly located to explore with its close proximity to the trendy and fun Temple Bar area which has great nightlife, Grafton Street for shopping, Dublin Castle and St. Stephan’s green.

Our first stop was the Guinness Factory at St. James Gate which was a nice walk from our hotel.  If you like Guinness, this is worth the stop.  We took the tour which finished off at the very top of the factory in the Guinness pub with a 360 degree view of Dublin.  Although I have to admit, several people looked like they were going to loose their Guinness as it’s completely enclosed by glass and pretty high up.  Ohhh, good times!

The next day we visited Trinity College to see the Book of Kells exhibit which was incredible.  Almost equally breathtaking was walking through the library, which sounds odd, but it was like walking through a movie set where the library shelves are several stories high dark hardwood filled with century old books.  We filled our first couple of days with these sites, some shopping and several pints of local brews.  We quickly became fans of O’Neill’s Pub as they had a great selection on tap and great live traditional music.  It was very easy to melt into the woodwork and simply enjoy the sights and sounds.

Dublin is a great city to simply explore, grab a pint, people watch, catch some live music or do a little shopping.  There are great restaurants and pubs everywhere and the Temple Bar area is full of funky shoppes.  You can easily spend a couple of days full of doing very little, but having a fantastic time doing it.

Pub in Cavan with a group of young musicians

One our third day we decided to drive up to Cavan County to do some research on my friends family.  It just so happened that Cavan was hosting the world largest Irish Folk Music festival as we pulled into town.  This was incredible, with fantastic music flowing out of just about every door that we walked by.  We ended up spending a good deal of time in the pubs listening to music.  The most surprising thing was that most of this music was played by school aged children that had more talent than I have in my little finger.  I also quickly learned that the pubs in Ireland are often family and community gathering places.  Big difference from the States, eh?

Previously, the world’s largest telescope on the grounds of Birr Castle

From there we decided to drive towards Galway on the Western side of the Island. With no real itinerary, we decided to get off the main roads and randomly explore. We came across Birr Castle which housed the world’s largest telescope for 75 years, built in 1845. We spent a good chunk of time exploring the grounds before continuing our journey where we came across Clonmacnoise Castle and ultimately ended up in Galway.

MMMMM! Oysters and Murphy’s stout at a local pub

Galway was probably my favorite city for many reasons. At 7:00 in the morning, sitting at a coffee shop in the square, live music was already being played. All the pubs served incredible seafood and there was just an incredible energy everywhere that we went. Galway is also a great location to venture off to the Connemara region, which is drastic in its topography. Some areas look like what I would imaging a moonscape to look like, while others are lush and full of life. We spent a day driving through Connemara where we came across Aughnanure Castle and then the magnificent Kylemore Abby and Victorian walled gardens.

Me leaning against the entrance wall to Kylemore Abby

Ghostly and beautiful prairiescape in Connemara

The drive back to Galway was mostly coastal and full of suicidal sheep…EVERYWHERE!  I will forevermore associate Ireland with sheep, vast untouched areas of raw and rugged beauty,and a simpleness that I have yearned to go back to.

From Galway, we decided to head south to Killarney and stopped along the way at the Cliffs of Moher.  For the most part the weather was beautiful and in the 60’s until we reach the cliffs where the temperature dropped to the 40’s with a pelting rain.  It was still absolutely beautiful!  A good rule to follow about dressing for the weather in Ireland, dress in layers. 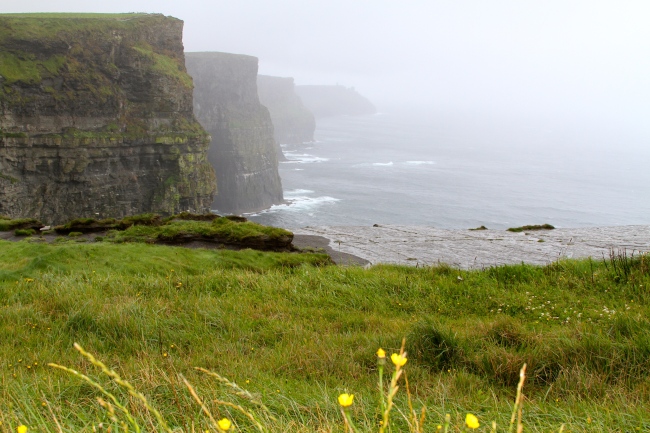 Upon reaching Killarney, we settled in at the Lake Hotel which reminded me of an old world hunting manor.  The rooms all have a lake view and there is woodwork and old world character throughout.  The restaurant was also one of the best we experienced in Ireland.  We spent most of our time in this region hiking as the Lake Hotel borders a National Forest in which we hiked through a rhododendron forest at least 20 feet high on our way to Tok Waterfall.  I’ve never seen anything like it.  Our last day in this region, we decided to drive around the Ring of Kerry.  A friend advised that most tours go counterclockwise, therefor we went clockwise to avoid the traffic which was a very smart idea.  Well, except for the occasional freakout where a huge tour bus was heading straight for us and the road was only wide enough for one vehicle.  Ehhh, we dealt with it…  One of us may have been screaming.  After all the hiking and screaming from the near death driving experiences, we decided to end our time in Killarney with a guys spa night at the Europe Hotel and Spa.  This was the BEST spa experience I have ever had.  Period.  Prior to the massages, they had us spend an hour or two in the men’s spa equipped with a salt water inifinity pool, steam room, sauna and a shaved ice machine to cool down. We probably hiked a good 20 miles so I feel pretty comfortable stating…Real men do spas!

The beginning of our drive around the Ring of Kerry 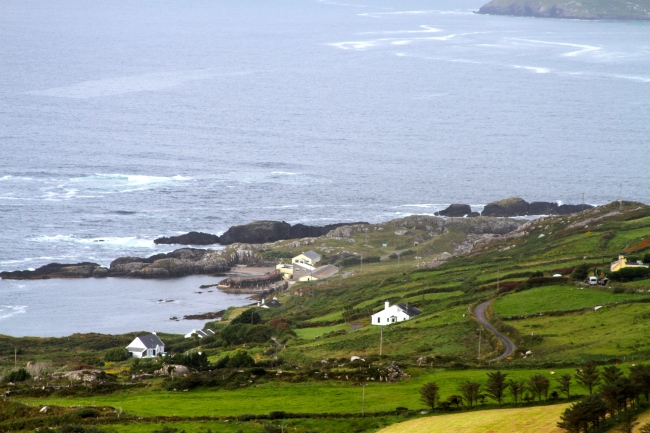 Small coastal village in the Ring of Kerry

From this point we are heading back up to Dublin, with a stop in Killkenny where we stopped to see the Rock of Cashel.  Which, by the way, is not a rock but an old castle with ravens nesting in the walls.  It was a bit eerie and cool at the same time as the property also housed a very large graveyard with ornate gravestones.  Not only was it fun to explore the castle but we also hiked the grounds and came across some other old buildings and gravestones… And sheep.  Always sheep.

While we  were in Kilkenney, we noticed a lot of people taking pictures around us.  It was just odd at first and then it became aggressive.  After exploring the town we were sitting in the hotel lobby having afternoon tea.  Um, yeah… we had afternoon tea, which was actually pretty good and a calming way to plan the rest of the afternoon and that night’s activities.  Anyway, there we were, minding our own business and a younger middle aged woman comes running up to me with a camera, squatted about 5 feet from me and started taking close up pictures.  Come to find out that there was a huge rugby tournament in town and I apparently am a dead ringer for one of Irelands top rugby stars.  So not only did we have an amazing vacation, but I left feeling like a star…If only for a day.

Well, I could go on and on, but this is a long enough post for now.  I hope you enjoy.  I cannot wait to go back and I hope that you find your way to the Emerald Isle someday as well.